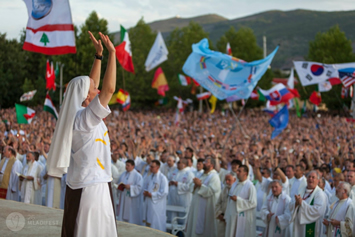 Something about the International Youth Festival held in Medjugorje

The idea about the prayer encounter of youth was born in the heart of one young pilgrim from England who shared this with late Fr. Slavko Barbaric in the end of the Marian Year in 1988. Fr. Slavko supported this idea and began organisation of the Youth Festival that he led and conducted until his death in 2000. After many conversations and lots of good will, the first Festival was successfully held with the Herzegovinian Franciscans as the main lecturers. The prayer encounters were held in the green tent and in the Garden opposite to the roundabout, as well as on Apparition Hill and Cross Mountain. The singing was conducted by a talented young priest, Fr. Liam Lotan from Ireland. After the successful first Festival, they all decided to continue with the preparations for the another one that was even better and mor prepared.

As Medjugorje grew, the idea of this Festival grew even more. It became the invitation to peace embraced by so many, but it also showed that yung people do notice it is not about some superficial peace, but it is about the peace that God gives to thoe who open their whole hearts to Him. This resounds even today, after many years of continuous prayers. Many decided to follow Christ after this experience in Medjugorje and they embraced the priesthood or religious vocations. The spiritual vocations along with the sacrament of confessions are one of the most beautiful fruits of Medjugorje. Young people love challenges and Christ′s imitation is exactly that – invitation to the radical change and following.